202030 minute episodesTV-MAComedy, Television
+ Playlist
Sign in to add this movie to a playlist.
0

The people tasked with creating a sixth branch of the armed services: The Space Force.

In the realm of cinematic parodies, this new Netflix original series starring Steve Carrell seems to share much in common with the classic Mel Brooks comedies. Based on the trailer, it seems to delve into controversial socio-political commentary, but avoid the seriousness of a cutting take-down by instead lambasting the more unusual elements of the current political situation. The focus of the film, of course, is on the institution of a new Space Force branch of the United States armed forces, which Steve Carrell’s four-star general character is tasked with leading.

With an impressive supporting cast including figures who have delved into mad-capped comedic territory previously, while also boasting impressive dramatic roots, the series will feature the likes of Fred Willard, Ben Schwartz, Tawny Newsome, Noah Emmerich and the exceptional John Malkovich. Its creators worked previously on the US version of The Office, which continue to deliver impressive viewership numbers of streaming services, proving the longevity of this form of socially-aware comedy.

The first season will consist of ten, 30-minute episodes, to debut in May 2020.

Be the first to review “Space Force” Cancel reply 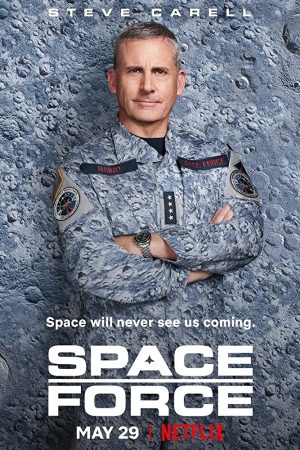