19431hr 42minPGAdventure, Classic, Romance
+ Playlist
Sign in to add this movie to a playlist.
0

A cynical American expatriate struggles to decide whether or not he should help his former lover and her fugitive husband escape French Morocco.

Whether you know it for eternally quotable lines, such as “Here’s looking at you, kid”, “Play it Sam. Play ‘As Time Goes By'”, “We’ll always have Paris” and “This could be the beginning of a beautiful friendship,” or you recognise the poster, leading performers and the name of Rick’s Cafe Americain from appearances in theme parks and other bastions of popular culture, Casablanca’s influence remains notable even 80 years after its release.

Anyone who has studied film history will also be aware of the film’s problematic production, and the extraordinary turns of fate that transformed what was expected to be a fairly average studio production, with a notoriously incomplete script into one of the most iconic and revered films to emerge from the golden age of Hollywood. It’s for these reasons that looking back on the trailer is a rewarding experience. That, and to bask in the glory of all manner of fancy transitions that the editors must have been thrilled to be able to utilize at the time.

Let me know what you think of the trailer, and how this film has impacted you over the years. Add your comment here.

Be the first to review “Casablanca (1942)” Cancel reply 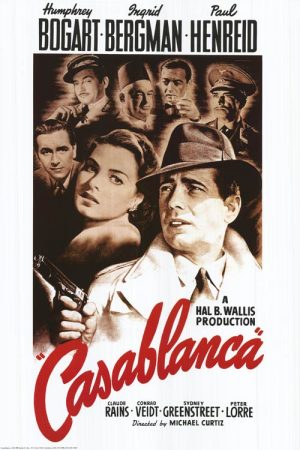