19411hr 59minPGBiography, Classic, Mystery
+ Playlist
Sign in to add this movie to a playlist.
3 views
0

Following the death of publishing tycoon Charles Foster Kane, reporters scramble to uncover the meaning of his final utterance; 'Rosebud'.

What’s truly great about this classic trailer is its lack of any pretense. Citizen Kane is regarded by many as the greatest movie ever made, and held on such a pedestal as to make it seem like an untouchable piece of art. It’s ironic, then, that its genius creator, Orson Welles, chose to promote the film using a coming attraction compilation that feels more like a promo for a upcoming variety show.

Sure, Orson Welles and many of his co-stars found their feet in radio performance before stepping in front of a camera, but given the film’s mastery of cinematography and pacing, it’s clear that this ensemble perhaps-intuitively knew how to construct a motion picture. That’s why it’s so surprising that the trailer shows very little footage from the film, and no imagery of Orson in the titular role, but jumps between footage of chirpy chorus girls and snippets of performers chatting to one another on the phone.

Definitely worth a watch. Let me know your thoughts by commenting here.

Be the first to review “Citizen Kane (1941)” Cancel reply 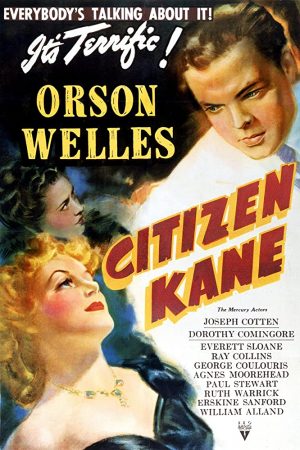